John began his insurance career in 1983 with The Travelers Insurance Company. In 1991, he joined Poland & Sullivan Insurance as a Commercial Insurance Advisor. John became President and equal stockholder along with his business partner Andre Hoeschel in 2003. John’s primary duties today consist of providing insurance advice to our commercial and personal customers. The designation of Certified Insurance Counselor (CIC) was conferred upon him in 2005 by The National Alliance for Insurance Education & Research.

John has served on regional producer councils for Travelers, C.N.A. Insurance and Donegal Insurance Companies. Since 1989, he has also served as an instructor at the University of Delaware’s Small Business Development Center.

In 2007, John was elected as Chairman of the Delaware Association of Insurance Agents & Brokers (DAIAB) and later that year was recognized as the 2007 Delaware Insurance Agent of the Year. In addition, in 2008, John was awarded the highest honor possible by the Pennsylvania, Delaware, and Maryland Independent Insurance Agents Group for his work in creating the DAIAB.

John is a lifelong resident of Delaware having graduated from Archmere Academy and the University of Delaware. 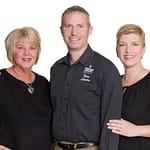